Random events or quests may appear during gameplay, either through entering high-alert rooms or accepting a quest from a quest shrine.

Successfully completing these events will either reward the player with one upgrade kit and 1000 XP or one android upgrade and 1000 XP.

At the beginning of every room, (even the very first one) there is a chance that a timed chest will spawn, either holding an item or weapon. It must be opened in the defined time limit or it will lock and require a keycard to open. The time limit scales with the chest's distance from the starting teleporter, between 40-90 seconds.

Has a chance to appear on any floor, will offer the player a reward for completing a quest. The possible quests are as follows:

Occasionally occurs when entering high alert rooms. The entire screen is covered in a dim green colour, limiting visibility and the ability to differentiate between enemies. This particular room variation offers no reward.

Occasionally occurs when entering high alert rooms. The screen is covered by a blue overlay, and the player cannot see enemy healthbars. Can be disabled by destroying two EMP towers, which grants standard quest rewards. 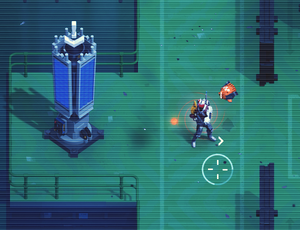 An ammo pile placed somewhere on the map is rigged to explode in two minutes upon teleporting in. Reach it in time and defuse it for standard rewards. Appears the same as the ammo crate used in Arena gamemodes.